You know you've found a mover and a shaker when you see someone with three jobs on the "current" section of their LinkedIn profile, with "founder" being one of those three titles. Jean Schindler is one such mover and shaker, and she is a proud community college graduate. 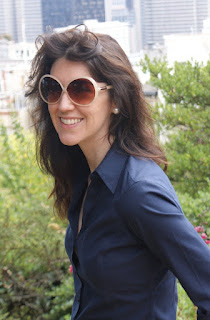 In high school Jean was home schooled, and when she graduated, her anti-establishment parents said "ah you don't need to go to college." Jean's parents were intelligent and self-educated - going to the library was a weekly family tradition.

But Jean wanted to go to college. She found it difficult to get many 4-year institutions to recognize her high school grades, so her parents encouraged her to try one class at community college. Jean enrolled at Glendale Community College in California.

"Community college saved me from falling between the cracks."

Jean owes a lot of her success to getting involved outside the classroom right away: "I was always interested in international relations and politics, and got involved in Model UN on campus, after my professor - who was also the Model UN advisor - told me to get involved."

Jean attended four Model UN conferences and served as the leader of her team in her final year at GCC.

Seeing her dedication, another professor encouraged her to transfer to an internship with the US State department. "I didn't think I could get it because I was from community college. My professor believed in me and told me to apply anyway."

"I couldn't believe it when I got the internship! That really shifted my perspective in understanding what I was eligible for. I could compete with these so-called 'smart kids.'"

Jean was a smart kid. Community college kids are smart kids. The idea that open-admissions means less-smart is what inspired me to start this blog in the first place. It's a stereotype that is - as Jean understood -  so incredibly wrong.

Jean also got involved in student government at GCC: "It made me so much more aware of the resources available. I ended up with a lot of scholarship money because we also had a great scholarship office. I transferred to UCLA with no debt and was able to pay for most of the first year at UCLA, including study abroad!"

Jean graduated with her Bachelor's degree from UCLA in 2005 and worked for a year doing research for a professor who was writing a book on intelligence reform after 9/11.

"One day on campus I saw a sign that said ‘do you want to teach English for a summer in China?' I decided to just show up. It turned out the opportunity was with Tsinghua University (known as the MIT of China). They would pay for the airplane ticket, provide housing, feed you every day, and give you a stipend! I was like 'are you sure this is legitimate?' It seemed too good to be true."

"But I realized it was legit, I applied, I got in, and I went to China! It was another step in being aware of international policy careers and international affairs."

After China, Jean moved to London and got her Master's in International History from the London School of Economics and Political Science, and did a fellowship in South Korea.

Today, Jean is Publications Director for a major non-profit that provides over 120 million dollars in grants per year to support democratic freedom in over 90 countries.

And she never forgot her community college roots. "For years my close friend and I talked about establishing scholarships at our alma mater, Glendale Community College. But as our conversations evolved we realized there were so many other things we wished we had known in community college - those first few years are so critical!"

"We realized having networks where students can talk to other professionals are really key. Networking is not about business card exchanges. It’s about understanding who someone is, how they fit into the larger picture, how you can connect them, and how can you help them. It’s really about relationship building."

So two years ago Jean and her friend Daniella Foster started the non-profit Emergent Leaders Network (ELN) to provide micro-scholarships and round-table networking discussions for community college students in their local areas.

Initially, they will give out four $250 scholarships at Glendale Community College, and have already held successful roundtable events - the first in Washington DC with a panel of local entrepreneurs and students from Northern Virginia Community College and the newly established University of the District of Columbia Community College.
In the future, ELN hopes to partner with interested faculty and staff or SGA's in community colleges across the nation to provide them with free tools, resources, support, and local networks to establish roundtable discussion events on their community college campus.

Jean has a beautiful vision: "Once the staff member is on board, there would be a cohort of students who meet together and have these round tables and invite other students, and create this network among colleges. The goal is to  connect students to people in their community who can offer job and career advice."

And as always, I had to ask this incredibly successful community college graduate for her advice for you:

"Start slow with your goals -  it’s about making small modifications in your habits. For example, when you go to a networking event, you don’t have to set a goal to shake hands with everyone in the room. Just start by showing up!"

"Half the time there are things students hear about, that sound interesting, but they don't go because it is inconvenient or it seems intimidating. Just go, even if you stand in the back of the room."

Never forget where you come from, and whenever you can - even if it's just a few bucks or your advice - think about ways to give back to your community college once you graduate. Jean is such a wonderful inspiration on how to do just that.