Finding yourself in your first job out of college: interview with 20-nothings blogger

Jessie Rosen writes the incredibly entertaining and helpful 20-nothings blog – meant to “remind you that you're not alone, you're (probably) not crazy, and (chances are) you're going to make it out of this alive.”

Jessie started her blog in 2007, and she writes all about how to make it through this confusing time called your 20’s. A big part of what makes our 20’s so daunting is trying to find our place in the professional world, so I interviewed Jessie to get her take on finding your first job out of college.

Jessie entered Boston College in 2001: “I had no idea what I wanted to do with my life.”

So Jessie tried a lot of different classes to figure out what she liked. She found herself really enjoying working on TV and on the campus newspaper, and decided to be a communications major. “Some people asked me why I didn’t go into a specific TV, writing, or film program, but I needed college to find myself and needed an atmosphere that offered me a lot of options.”

Jessie embraced the idea of exploration.

“College is a special place in that the community, activity, and participation, and all of that energy to do something is very much a part of the culture. At my school especially, it seemed like everyone around was doing something or starting something. It was incredibly motivating, and that made me feel there was nothing I couldn't do.”

While not every college culture has the buzz of creation and activity in the air, it only takes one student to light that fire on a campus. And it is indeed contagious.

While in college, Jessie jumped right in and practiced her writing skills by starting websites like pregameboston.com.

But when she graduated she was met – like many post-grads – with unemployment. “I didn't get a full time job for 8 months after college and lived with my parents; I wasn’t expecting marketplace to be that hard.”

Jessie did an unpaid internship for a while and tried out a number of small side-opportunities: “I think I seemed really uncertain about what I wanted in interviews. I wanted to do so many things, but I eventually realized you just need to pick something and then use it to find out what you do and do not like.”

So Jessie picked something and got a job as the assistant to the CEO for TheKnot.com, and then moved up to marketing coordinator after six months. She learned so much in this first job: “I got a great education in web entertainment and how to interest readers and how to make things entertaining online. It was a very smart company and smart CEO, and I really learned a lot.”

During this time Jessie also found out she really enjoyed writing. Once she realized her passion for writing, she contacted Boston College alumni who were writers through her career center in order to learn more. Soon after, she started the 20-nothings blog.

Jessie has become a guiding (and entertaining) light for 20-somethings around the world who read her blog. I asked her what advice she could share with you that she wished someone would have shared with her before graduating college:

“I wish someone would have told me not to be so stressed out about getting my first job. It’s important to be prepared and make a living, but don’t worry so much. Do anything that interests you. Nanny in New York. Serve in Peru. Our society puts so much pressure on how much money you will make or how cool your job sounds.”

“Take life as it comes, and just pick something. Six months after your first job you will be a different person. It’s okay not to like your first job and it’s okay to change direction completely. I was so frustrated that I couldn’t figure it out and thought what is wrong with me. The reality is it’s a very hard thing to figure out, and the less pressure you put on yourself the better.”

In short – keep exploring. Engage deeply wherever you are. And realize that when you graduate college, the learning has just begun. 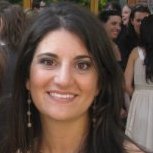 Today Jessie is a producer of branded entertainment for Generate where she works on digital, TV, and interactive concepts and campaigns.

Jessie loves being in the creative space, and continues honing her own writing and creative skills on her blog.