How to be a successful TV news anchor: my interview with Amy Kaufeldt 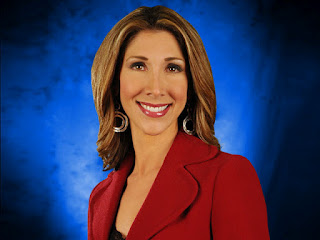 Amy Kaufeldt has what many people might consider a dream job. It is a job that many desire, but few attain. Amy is a celebrated anchor on FOX 35 Orlando, and she is one of the nicest people I've ever met.

After my book release this past March I ended up doing quite a few local and national television shows. When I waited in my first green room for my first show in Boston, I literally felt like I was in a hospital awaiting major surgery (i.e. I was terrified). But every time, it was people like Amy who put me at ease.

When I did my piece for FOX 35, they quickly rushed me from the green room to the studio, and put me in front of a camera, with the anchors at their desk far, far to my right. Up to that point all my interviews had been on a couch and I was able to meet the anchors first. This time, I was just facing a daunting camera while the mic was strung through my hair. Yikes.

After I did my bit it was time to go. I unhooked my mic and looked to find my purse, when all of a sudden I see Amy getting up from her news desk to come up to me. She grabbed both of my hands and said "thank you so much for coming on. That was so good, we are so happy to have you." She made me feel instantly welcome and warm.

And then - I'll never forget this - the teleprompter that had been in front of me during my segment came on, and Amy was due for a voiceover. She quickly turned her head and read her piece like a pro. When she finished, she thanked me again and gave me a hug.

I learned so much from interviewing Amy a few weeks later, but I had to tell you this part because I think it sums up why she is as successful as she is. While some people think being on TV requires developing a certain "persona," Amy proves it's really all about being yourself, and caring deeply about what you do.

Amy went to college at Miami University in Ohio. "I knew I wanted to go into Journalism right out of HS, and MU had a great journalism program. It was lesser known, but I knew I'd have a great opportunity to work for a national public radio station at the college."

Amy took advantage of that opportunity at her college right away. "I would get up at 3am and anchor and help produce the morning news, and then went to class. My college roommates would just be coming home when I was leaving to go to the station. They all thought I was crazy."

So many people think to be on TV all it takes is getting in front of a camera one day. Amy started honing her skills very early, and has been hustling ever since. As Amy said, "you really have to force yourself to learn beyond the classroom and get real world experience."

Amy also agrees that we all often need someone else in our lives to give us that extra push and to "find that person who is going go push you outside your comfort zone." For Amy, that person was the news director at the radio station, Bob Long; "he was willing to work with students and show them what it was going to be like in the real world." And then of course, it's up to you to follow the advice and "take the leap. If you want to succeed, you have to force yourself to be uncomfortable."

Like anyone I've talked to in media about their first job, they say that being willing to move anywhere and start small are the most important factors.

"I sent tapes all over the country for an on air job. Great Falls Montana was my first offer. You really cannot be afraid to move if you want to be in broadcast journalism. Start in a small market, learn how to do everything, and really hone your skills."

Amy lived that mantra. At the small station in Montana she was to anchor five days per week and produce the entire show. "I had to roll feed tape and produce everything myself. I learned so much."

Amy then moved to Tennessee, and then to Oklahoma where she met her husband. An important reminder: "the pay is terrible in the beginning."

"Being willing to start small is the most important thing. So many people work their way up and want to start big. You have to be willing to pay your dues in a small town, making very little money."

When we graduate college we instantly forget this. We expect to make a great salary and to be at the top of our game in only a few years. It almost never happens this way, in any industry.

After her extremely hard work in small markets, she got the call to anchor in Orlando, and has been with Fox 35 ever since.

Amy had a lot of great advice to share.

What advice can you share that wished someone would have given you when you were in college? "I dont think you realize how technology and jobs are going to change throughout the years. It is daunting to keep up. I would have loved to have known that changes are rapid, they are coming, and you have to be able to adjust with those changes, otherwise you can no longer survive." In other words, the learning never stops, so honing your learning skills now in college will benefit you in the long run."

What advice do you have for students who might want to have an on-air job? "You have to be willing to work hard. Some people believe this business is all about the glamor of being on TV. What we do behind the scenes is hard work. We work crazy hours and long hours. We dont just show up for a show. We have to be accurate, fair, balanced, and ethical. Those are all big challenges."

"People think you just read a teleprompter and have someone buy nice clothes for you, but there is so much more to it than that.  When you find someone on TV that you really enjoy watching, you enjoy watching because you feel like you can relate to them and that they've let you into their lives, and that they are the same person on TV that they are in person. Engage and understand and have a relationship with viewers. If you try to put on an act, viewers can tell if you are not being yourself."

And as I mentioned before, Amy is is herself on and off camera. And she is an incredible role model for what it means to be willing to adapt, hustle every day, and start from the bottom. It takes time. But the rewards can be huge.

Special note: In the time since interviewing Amy (who works for a local Fox station in my community), I began a freelance relationship writing as an educational columnist for the community section of Fox News Latino (so excited!). Although this post wasn't written in any connection with my work with Fox, I wanted to make sure that I shared my relationship with the organization. I will also keep you posted with any new columns that I write on Fox News Latino - I am very excited to share! :)
Posted by isaadney at 10:27 PM

Email ThisBlogThis!Share to TwitterShare to FacebookShare to Pinterest
Labels: Amy Kaufeldt, Fox 35, how to be a news anchor, how to be on tv, how to have an on-air job, interviews