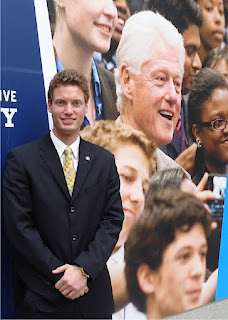 Mark is also an academic superstar who defies community college stereotypes and whose dedication and initiative makes him a great role model for all students looking to move forward in their lives.

Mark's success has been featured in the Community College Times and the New York Times, and recently he shared with me a behind-the-scenes look of his success, just for you. Much can be learned and modeled.

As one of seven children, Mark chose to attend Rockland Community College in New York; when Mark graduated high school he just wasn't sure where his life was going to go. "I was more unsure about my future than ever."

However, simply entering an honors program is not enough. Going to class and going home is not enough. In today's competitive academic world, you must stand out in order to be accepted into a Tier 1 or Ivy League institution. And Mark did just that.

While at community college Mark earned incredible awards and accolades. He was accepted to Phi Theta Kappa and was named NY State's 2010 New Century Scholar and chosen as an elite-member of the All-USA Community College Academic Team. He won the Rockland County Distinguished Service Award and a Congressional Certificate of Appreciation.

He was also selected to attend the Clinton Global Initiative University 2010 meeting held by President Clinton, where he was recognized for his work on the issue of modern-day slavery, as well as an invitation from Dr. Jill Biden to attend the first ever White House Summit on Community Colleges.

If you're like many students, you read the list of awards above and you feel insignificant. That is how most of us feel when we read the impressive bios of others. But as I hope you know these success-story posts are not about telling you how awesome someone is to make you feel less-awesome. They are meant to help you transform your attitude when you read the bios and stories of others to: hey, if they can do it, I can do it too!

I asked Mark what motivated him to do the work that led to all of these incredible awards and his subsequent acceptance to Georgetown:

"I remember it like it was yesterday. During my first semester at RCC, my English 101 Honors professor Dr. Nancy Leech informed the class that we would be going to hear a lecture in the Cultural Arts Building instead of our normal class. What I perceived as relaxation away from class would soon turn into inspiration.

The speaker’s name was Simon Deng. Mr. Deng, hailing from the Sudan, was no ordinary man. Quickly into the lecture, we would learn of Mr. Deng’s plight as a refugee in southern Sudan where at the age of nine he was abducted and sold into slavery. For me, this was the first time I was aware slavery still existed today, and Mr. Deng reaffirmed that in fact there are over 27 million slaves’ today - more slaves than at any other point in human history.

Shocked by the reality of the situation, and the personal anguish Mr. Deng experienced early in life, the lecture closed on an inspirational note. Before finishing up, Mr. Deng emphatically told us all that despite the horrors of issues such as slavery, etc, it only takes one person to help make a difference.

From an uninvolved quiet student, the rest of my time at RCC would be devoted towards taking up Mr. Deng’s call and helping make a difference in the fight against modern-day slavery."

While a student at RCC Mark established the SUNY Rockland Anti-Slavery Committee. Under the banner "Be the Key to Freedom" he led efforts to combat the modern human slave trade in the U.S. by lobbying state officials in New York and urging them pass a resolution that aims to stem the flow of enslaved people into the country.

According to Mark, "each year an estimated 14,000 to 17,000 people are brought to the U.S. to be traded as human slaves, with New York state functioning as one of the largest trafficking hubs. In 2009, the legislature of Rockland County passed a memorializing resolution co-authored by me and since then several other local town board's in Rockland have done the same."

As a sophomore Mark's work earned  him the opportunity to travel to Washington, D.C. where he spoke with Congressman John Lewis about advocacy and human rights.

Mark's advice? "There is really no secret behind my success. No matter where someone attends school, how old they are, etc. amazing things can happen when an individual decides to commit and dedicate themselves to something.
When the speaker Simon Deng said 'it only takes ONE person to help make a difference,' my social conscience awakened, sparking my motivation to want to do more and do better with my life. The sky truly is the limit, and with commitment, dedication and hard-work your dreams can become a reality. You just need to take that first step."

While it seems like all of this happens overnight, Mark's story took place over four years. And while it seems like a lot, it truly does start with the small first steps. Choosing community college. Enrolling in the honors program. Joining Phi Theta Kappa. Showing up for class. Paying attention to a guest speaker. Taking action on your campus. Being that one person who makes a difference.

When you start in community college, as Mark says, "the sky is the limit."
Posted by isaadney at 4:18 PM