College is Like Sports - you must be willing to work hard, explore options, and take The Big Lead

College is Like Sports - you must be willing to work hard, explore options, and take The Big Lead

You may have heard recently about all of the trade rumors going around regarding athletes such as Peyton Manning andDwight Howard. In one case, a player is forced to go. In the other, the player wants to go.

What is interesting to me, is that many of them do “go” at some point. Players rarely stay with one team forever (by the time this post is up Manning and Howard may very well already be on another team). They are traded and moved around. However – this doesn’t change how hard they must work in their current situation, because their performance affects who will want them next.

Exploring options, taking chances, working hard, and being willing to move around is what defines the success of Jason McIntyre, new friend of mine and founder of the popular sports blog regularly featured in newspapers, radio, and television -  The Big Lead. 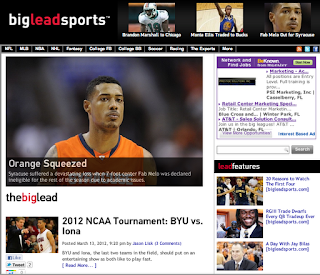 I talked with Jason earlier this week to find out the story behind his successful blog (5-6 million page views per month andrecently purchased by USA Today Sports Media Group!) and his life. He has some great perspectives that I hope will serve to ease your nerves about your personal “trade” rumors that keep you fearful of your next move.

Jason has known he wanted to be a writer since his 8th grade creative writing class. If only we could all be so lucky! He was aware of his love for writing immediately, and began pursuing it avidly. When it came time for Jason to go to college, he applied to eight universities and got into seven – all but his top choice, James Madison University.  He started off at Virginia Tech for his first two years and then transferred to JMU (Jason notes it was much easier to get into his top choice school as a transfer because there was less competition –good news!).

While Jason isn’t a community college graduate, he shares the similar transfer experience, and found it difficult to acclimate to a new environment with people who had already formed bonds for the past two years. In addition, some of Jason’s credits from Virginia Tech didn’t transfer to JMU.

So what did he do?

Jason got involved. He lived near campus. He broke into the journalism program crowd. He joined the newspaper staff. He kept pushing even when it was hard to get established. He made himself a part of the new team.

Jason also stayed in college for a 5th year to make up for the classes that didn’t transfer. He took two classes each semester and worked an internship at a newspaper. Jason owes a lot to this 5th year, and was thankful for it. It really helped him ease his transition into the real world, and if any of you are a post-grad, you know how difficult that transition is.

It is always best to get your degree in the way that saves you the most time and money (e.g. taking 5 years to graduate college because you fail classes and party a lot is not a good option). However, Jason’s 5th year was highly purposeful. It allowed him to transfer to JMU’s journalism program and spend a valuable year working in an internship for a newspaper. There’s not always a need to rush to the next phase of your life.

This experience led Jason to his first job as a sports reporter for a small paper in New Jersey. Jason credits his success to not being afraid to move away and try something different. From there, Jason hopped around to a variety of assignments, moving up to the larger newspaper that merged the sports section of the smaller one with the larger one, and then moving into a big job in the NY City entertainment media industry when the previous newspaper job proved to no longer be the best fit.

But then something happened. Jason missed writing about sports. He always loved sports; he realized that if he couldn’t play them professionally, the next best thing (and what he was talented at) was to write about them.

And thus, The Big Lead was born. It took years before The Big Lead moved from a website Jason worked at two hours every morning before work and two or more hours every night after work, to a full-time job. Again, overnight success is a myth.

Jason confirms that hustle is the most important aspect of success in your life; it’s about going the extra mile and spending your time wisely towards your goals. 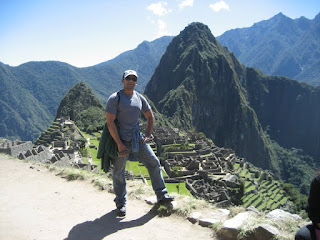 “If you want to build something, you have to hustle.”

You should be hustling in your life every day, but not at the total expense of fun. Because as Jason confirms, once you reach adulthood, fun with friends like you can have in college is just not the same.

Jason’s advice to share with you that he wished someone would have shared with him in college?

(I swear I’m not making these things up).

When I first started writing my book all about the power of relationship-building for college students, it was only something that I had seen work powerfully in my own collegiate and professional life. And now the more I read and the more successful people I talk to, it is apparent that this is a universal principle.

And the good news is, as Jason highlights, you are living in the greatest time in history for networking! When Jason was in college he had to physically mail stuff to people in order to connect with them (you know, mail, like paper letters written with ink and sent via stamps? ;))

Go on one of these sites right now and ask advice of someone who has a job that interests you. Don’t think just do it - hustle! And if you’re not sure exactly what to say, what to ask, or how to approach someone, you can learn it all in my book.

As Jason advises, “if you want to be an astrophysicist, follow one on Twitter!” Read their tweets, build a relationship, and ask for advice.

For all Jason’s success, he is one of the most humble guys I’ve met. It was so hard to pry out of him what makes him successful, because he kept referring to luck. It’s because he’s humble and he recognizes all of the incredible twists and turns and trades in his life that he seemingly had no control over.

However, as the old adage goes, luck is when preparation meets opportunity.

And Jason has always been prepared by knowing what he wanted to do with his life, and willing to hustle every day, no matter what team he was on.

Find out who you are, what you love, and what you’re good at, and hustle every day. You do not have to wait until you have the right job, the right credential, or move to the right place. You just have to play your hardest, and be willing to adjust your plans when opportunities come your way.


To read more about Isa's personal story & how you can build relationships to: make positive friends, be more successful in academics and work, find the right people to connect with, and access the hidden job market, grab a FREE e-copy of the first chapter of Community College Success: How to Finish with Friends, Scholarships, Internships, and the Career of Your Dreams! Claim your free copy on the Facebook page!
Posted by isaadney at 10:18 PM